WETLANDS – A SOURCE OF RICH BIODIVERSITY

Wetlands are home to diverse flora and fauna around the world. The Convention on Wetlands also known as Ramsar Convention defines Wetlands as  “Areas of marsh, fen, peat land or water, natural or artificial, permanent or temporary where the water is static or flowing, fresh, briny or salty, including areas of water logging made by man like paddy fields, the depth of which at low tides does not exceed 6 meters.” Around 5 % of land in Nepal is occupied by wetlands. The wetlands of Nepal, from glacial lakes to reservoirs to paddy fields, are distributed across the country from low lying flat Terai to Himalayas. The National Wetland Policy (NWP) 2012 of Nepal defines wetlands as “perennial water bodies that originate from underground sources of water or rainfall. It means swampy areas with flowing or stagnant fresh or salt water that is natural or man -made, or permanent or temporary. Wetlands also mean marshy lands, riverine floodplains, lakes, ponds, water storage areas and agricultural lands.” Wetlands of Nepal is categorized as Rivers, Lakes, Reservoirs, marshy Lands, Ponds and Irrigated paddy fields covering an estimated area of 819277 ha. There are 19 types of natural and 10 types of man-made inland wetlands in Nepal. Nepal has 10 wetlands listed as Ramsar sites and have international recognition. 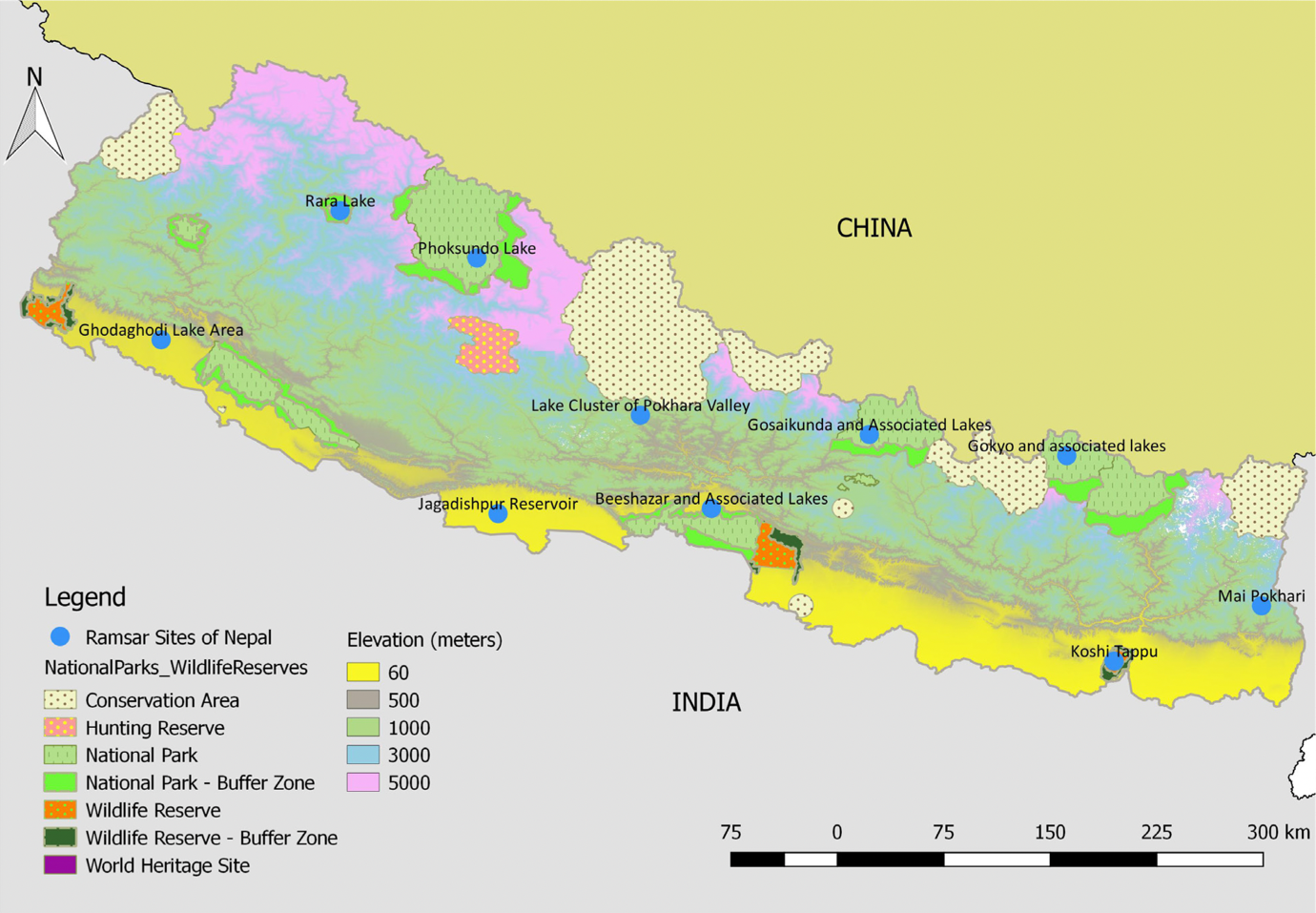 Wetlands hold ecological, cultural and economic values and are significant for the wellbeing of the natural ecosystem and communities. Most of the rural communities of Nepal are dependent on wetland resources for their livelihood. For marginalized and indigenous communities such as Majhi Jalari, Tharu and Mallah wetlands are important income generating resource.

Many threatened and endangered species are found in the wetlands of Nepal. It is an important ecological habitat for migratory birds, aquatic animals and other wild species. It provides shelter to 230 indigenous fish species (Rajbanshi, 2013), 102 species of phytoplankton, 109 species of mollusks, 117 species of amphibians (IUCN, 2004; ICIMOD and MoEST, 2007; Budha 2012, NBSAP, 2014). Likewise, its home to 27 % of nationally threatened bird species (BCN and DNPWC, 2010), 85 % of endemic vertebrates (IUCN, 2004), and 24 % of Nationally protected plants.

But wetlands of Nepal are fast disappearing. Urban and economic development has resulted into its degradation. Around 5.41 % of the total wetland area has been converted into croplands. Unclear policies and management responsibilities, lack of technical, financial and institutional capacities have added to the degradation of wetlands. In addition to this encroachment, invasion of alien species, siltation, unsustainable use of wetland resources has resulted into further degradation of this diverse ecosystem.

It is essential to build the capacity of the wetland communities along with the general public on the conservation and protection of wetlands. WCN since its establishment focusses on the conservation of wetlands across the country through education and community participation. WCN has developed education materials for students and teachers in order to familiarize them with the importance of wetlands, document local wetland areas of importance and work towards conserving them. In an attempt to support the National Ramsar Strategy and Action Plan, 2018 – 2024, WCN is also working towards engaging local and federal stakeholders to build knowledge on wetlands and develop innovative solutions for wise use of wetlands while conserving it.